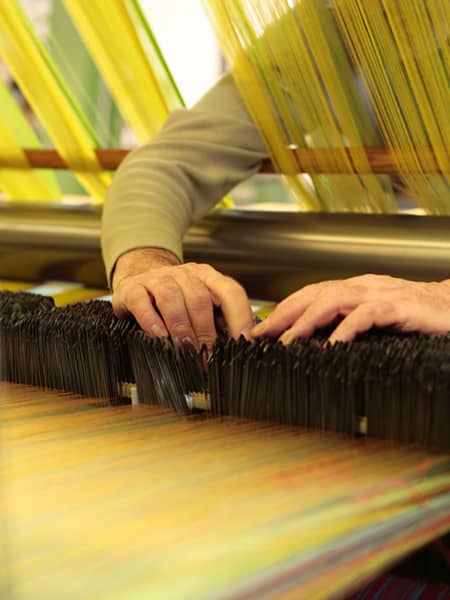 The Jacquard loom was developed by Joseph Marie Jacquard in the early 19th century. PINTON Jacquard’s sophisticated technique can weave up to 105 threads per cm2, allowing for a large span of textures, designs and colours. Indeed, despite the number of colours on each loom being limited to 7 or 8, the crossing of the threads offers an extensive range of colours and hues, hence more than 500 possible colours per loom. In addition, this particular technique makes Jacquard fabric extremely resistant to deformation by stretching and to tearing.

Adaptable to various supports, Jacquard fabric can be plain with placed patterns or in « all-over », in other words a continuous and regular repetition of patterns over the entire surface. The PINTON Jacquard is manufactured in 6 stages, from the warping to the finishing touches, including the design of the cartoon which, nowadays, with the assistance of computer software, allows for a very fine weave.